We exchanged the kids every Saturday in front of the Ocean Springs Police Department downtown. At Addison’s urging, I carried a small tape recorder with me at our exchanges, and I had half a tape filled already with bizarre rants from Liam. Two weeks before, he accused me of giving out plentiful blowjobs to various acquaintances the last time I’d gone to California (almost two years before). This last week, I hadn’t given him much chance to talk. My only goal was to inform him of a little injury Avery had suffered a few days before, seeing ahead of time that it could easily become just the fuel Liam longed for in his attempt to smear me in court.

Liam had broken the protective order half a dozen times already, following me around town, driving by the house and using his fingers to motion shooting a gun at me. In Mississippi, when someone breaks a protective order, they take a report.

There is no consequence.

That is to say, a protective order in Mississippi is goddamned meaningless: nothing but a piece of paper. I was so on edge, I needed Mama’s gentle presence and her sweetness by my side. Without her, I felt lost, vulnerable. Mama had just come back, thank heavens. When we picked her up from the airport in Gulfport the Thursday before, I could see the horror in her eyes at the state of things.

Six months after the storm, and nothing was better. By now, I was used to the post-Katrina landscape—it seemed almost right to me, equal in devastation to my personal life, my family blown to bits. But as we stood in the baggage area, I could see the sadness on Mama’s face. Besides, the news was covering New Orleans for the most part, forgetting almost entirely that the Mississippi Gulf Coast had been ground zero of the storm.

The terminal floor was stripped to concrete and had slick black mold growing everywhere in patches, with pure white concrete paths worn clean where the steady stream of relatives and government contractors passed each day. Great swaths of dirty plastic hung where automatic doors once slid open between the heat outside and the piped cold air of the terminal. Now everything was (by default) outside. There was a ceiling, but not much of one. The heat was stultifying.

On the car ride home, Mama sat in silence. Grayson barely spoke still. From his ocean-blue eyes stared a soul that was more thirty than three—cautious, sad, knowing too much. He didn’t let me out of his sight these days, and when he did speak asked me if Daddy was going to come back and “try to kill you some more.”

Aidan, still a baby, had bad dreams, wailing in his sleep, “No, Dada! No, Dada! No, Dada!” I was trying to get the kids to sleep in their own beds, but every time I’d hear that cry from Aidan, I’d rush down the hall to get him, often finding Mama standing outside his door already, tears streaming down her lined, pretty face. 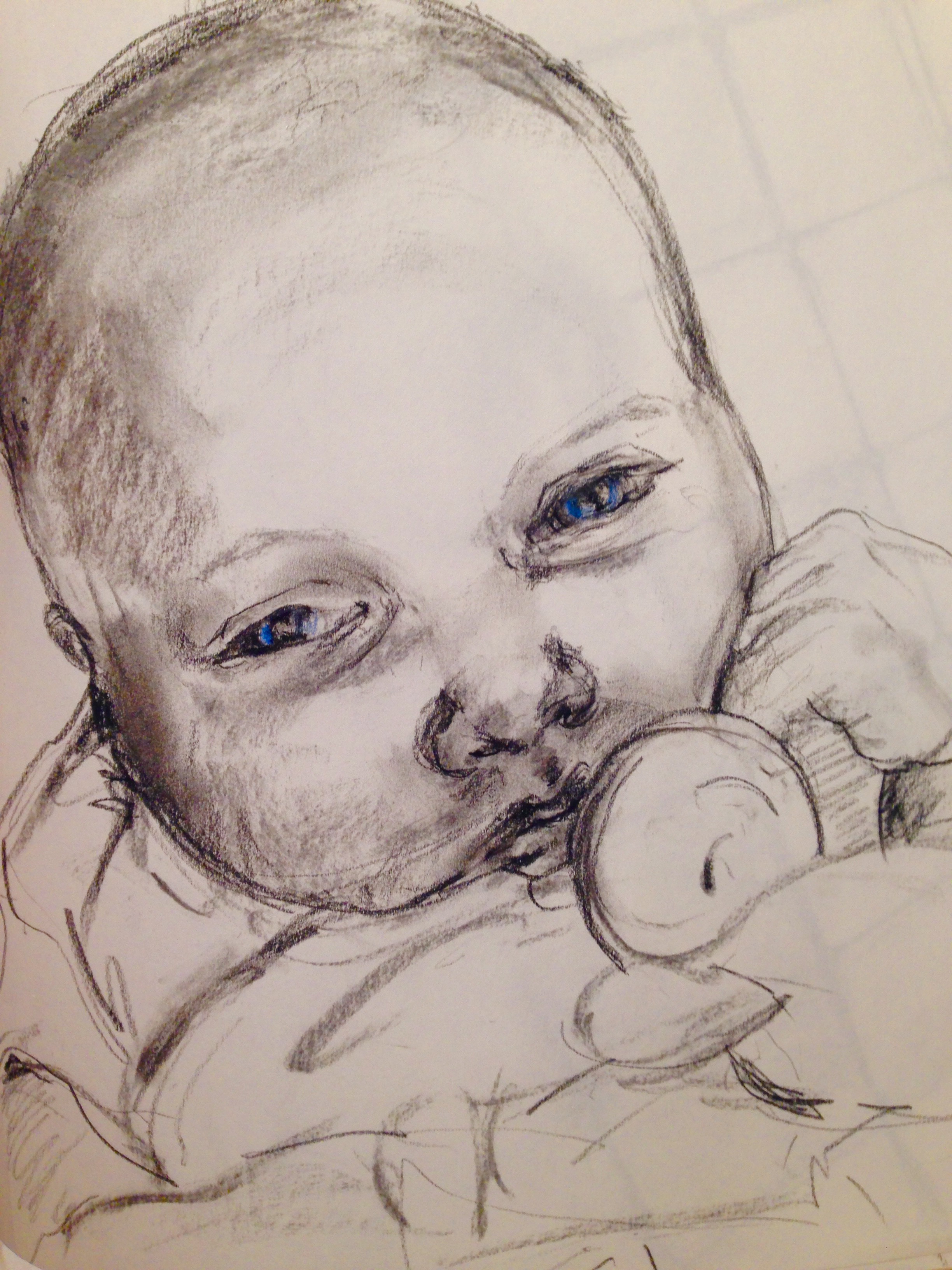 My heart broke over and over, but I did what I could to make them feel safe, to let them know that we were out of harm’s way now and nothing bad was going to happen. At night, after they’d fall asleep, I’d cry myself to sleep, rocking like a child. I needed Mama, and she came.

Her first night back, they all clamored for Mama’s attention, climbing onto her lap and dragging her up and down the halls to each of their rooms. At bedtime, Avery and Grayson decided to take a shower together, as they often did.

After the storm, not only was the ground outside our home contaminated, the Gulf Coast Research Laboratory had discovered that, post-Katrina, there were more biting insects on the coast than in any one designated place on the entire planet. We had run out of ways to entertain ourselves months before. That big shower in the master was like a playground for them, alternative sprinklers to play in.

They had a new game they liked to play: Ice Cream Shop. In Ice Cream Shop, they filled the baby’s plastic stacking cups with water and suds and soap bar “scoops” and sold them back and forth to one another. The shower was spacious, the inside tiled entirely—including the floor—with cobalt ceramic I’d chosen those many months before.

That night, I was changing Aidan on the Jenny Lind changing table in his room, looking out the window onto the quiet street, the exact same place I’d been a few months before, the night of the attack. Every time I changed Aidan, I thought not of that night but of another morning, of seeing the garbage man hop off a truck and grab our can, my entire collection of journals—probably fifty in all, kept since I was eight years old—dropping in.

The pages lifted in the damp salt air like egret wings, lifting at once in a panic in the marshes. The truck pulled away. Liam had hassled me about the contents of those journals for years—every girl I’d kissed, every person I’d fucked, every place I’d been without him or crush I held in my secret heart, every poem I wrote that wasn’t about him (all of them) was held against me.

He’d read them all: twice.

At least once a month, drunk, Liam would start in about something from the journals, his rage growing sharper with each beer, ranting sometimes for hours on end, sometimes until morning light. He was meticulous in his outrage—every book I owned written by a former lover had to be destroyed, every piece of jewelry accepted as a gift thrown out, every article of clothing mentioned in a reminiscence burned. The crudely produced student literary journal from grad school, where my poem sat side by side with one by Christina—a butch Latina from San Antonio, my girlfriend while I was at Sarah Lawrence—was torn to shreds and thrown into the fire. In Liam’s mind, swirling with obsession, I had no right to a past.

“You’re a whore,” he insisted, “and no one thinks you can write.”

I would lower my head and stay quiet, still. “You don’t exist without me.” His goal was to erase me. Every time I changed Aidan’s diaper on that table, I thought of my journals falling into the acrid back of the truck like so much trash, my loopy handwriting across the pages smudged with filth. A high-pitched wail snapped me out of it. I shut the diaper quick and ran toward the master bath, meeting Mama at the top of the stairs. We got to the bathroom at the same time. Avery had fallen, slipped on the slick soapy floor, and hit her back on a plastic Tupperware pitcher I kept in the shower, which I used to help rinse her long, thick, often tangled hair. A scrape about three inches wide by five inches long appeared on the right side of her back, breaking the skin where the rim of the pitcher had scraped her ribs from behind, bruises rising like rust on a tiny cage.

She cried and cried. “It’s okay, Shuggie. It’ll feel better in the morning,” I reassured her. I’d been calling her Shuggie since she was born. Liam and I had agreed to name her Hazel, but—as was his way—he revoked his “permission” when she was born. He rejected all my other suggestions, too. When he had gone home to take a shower, I filled out the birth certificate without him, naming her after Shug Avery in The Color Purple.

Fierce, loyal, a songbird, a girl who would know how to sing. “It hurts, Mama!” she wailed. “I know, baby.” I cleaned her up, put her in the new nightie Mama’d brought, and we all went to bed. In the bayou dark, all the streetlights having been washed away with the storm, her big blue eyes, set deep in her little Kewpie doll face, gazed at me, solemn.

“Do I have to go with Daddy?” she asked.

“Yes, Shuggie, you do,” I said, wishing already it wasn’t so, a fierce dread rising.

From Some Bright Morning, I’ll Fly Away by Alice Anderson. Copyright © 2017 by the author and reprinted with permission of St. Martin’s Press, LLC. Read an interview with Alice Anderson about the memoir here.

Alice Anderson's work has appeared in literary journals including AGNI and New Letters and is featured in anthologies such as American Poetry and On the Verge. Her second collection of poetry, The Watermark, contains three Pushcart Prize–nominated poems; her first, Human Nature, was published to critical acclaim. The recipient of The Plum Review Prize, the Elmer Holmes Bobst Prize, and The Great Lakes Colleges Best First Book Prize, she also received the Haven Foundation Grant from Stephen King. More from this author →