When people ask me why I came to Amsterdam, I tell them I’m on a lifelong quest to find out who could paint the best peeled lemon.

In the Rijksmuseum of Amsterdam, I breeze past the Rembrandts and Vermeers, the noisy school groups and throngs of people taking the same photograph, until I find the quiet halls of the still life paintings. It’s soothing to be among painted chalices, silver bowls overflowing with grapes, bouquets of flowers, crumbling loaves of bread, fruits with their peels dangling seductively off the table.

I was first drawn to still life paintings because I felt they asked so little of their viewers: Here is a painting whose only intent is to be pretty. When I was a young art student, still life works were my first foray into oil painting. I spent hours painting and re-painting oranges and lemons, learning to get the pigments and shapes correct. Stripped of conventional narrative, still painting is an exercise in color, detail, and precision. And no one was better at creating these vapid beauties than the painters of the Dutch Golden Age in the seventeenth century.

The answer to my lifelong quest, by the way, is a man named Willem Claesz Heda. He painted a peeled lemon the best. On my way home from the Rijksmuseum, I stop by a grocery store to pick up beer, a loaf of bread, some cheese, and fresh fruit for dinner. I have to climb a tiny sloping staircase to access my third-floor canal house apartment.

Once inside, I arrange my food in a little tableau on a cutting board. The bread broken carefully, neatly sliced apples, a round of brie.

I think about taking a picture to post to Instagram. I live in Wyoming, a place where fresh fruit can be a rarity. My usual dinners at home of grilled cheese or quesadillas do not merit photography.

Poet Mark Doty once described the still life: “It is an art that points to the human by leaving the human out; nowhere visible, we’re everywhere.”

Here’s everything outside the picture—me, a twenty-seven-year-old graduate student, eating alone in her Dutch Airbnb apartment, mostly because it is cheaper, but also because it is a way to avoid going to a restaurant and requesting a table for one.

I play Netflix on my computer and eat from my tableau without documentation.

The Dutch have a term of this specific brand of bountiful still life—pronkstilleven. “Pronk” translates roughly to “show off;” “stilleven” to “still life.” Showing off was the general ethos of Dutch culture in the seventeenth century. By the 1660s, Amsterdam was one of the leading ports for global trade, resulting in the Dutch Republic having more money and goods than they knew what to do with.

The ponkstilleven is the perfect distillation of this era—it serves as both documentation of wealth and object of wealth.

Take the peeled lemon featured in so many still life paintings. It looks benign to the modern eye. But lemons didn’t grow in Dutch soil when these paintings were produced. In order for painters like Willem Claesz Heda or Jan Davidsz de Heem to feature a lemon in one of their still lifes, that lemon would have to travel—far.

Thanks to a series of intricate trade routes, the Dutch had access to lemons, but at a steep price. The lemons were imported from the Mediterranean islands, packaged in salt to preserve them over their long journey north. The Dutch had to go through a series of peace negotiations with Spain—a country they previously spent eighty years at war with—in order to maintain their trade network between Northern Europe and the Mediterranean. Lemons were an example of the Dutch Republic’s diplomatic successes and its extensive trade network, and the people who could afford lemons wanted to show off.

In a 1601 still life painting by Hieronymus Francken the Younger, a slice of lemon sits beside pears, grapes, a loaf of bread, an oyster, a glass of wine.

The title of the painting? Rich Man’s Meal. 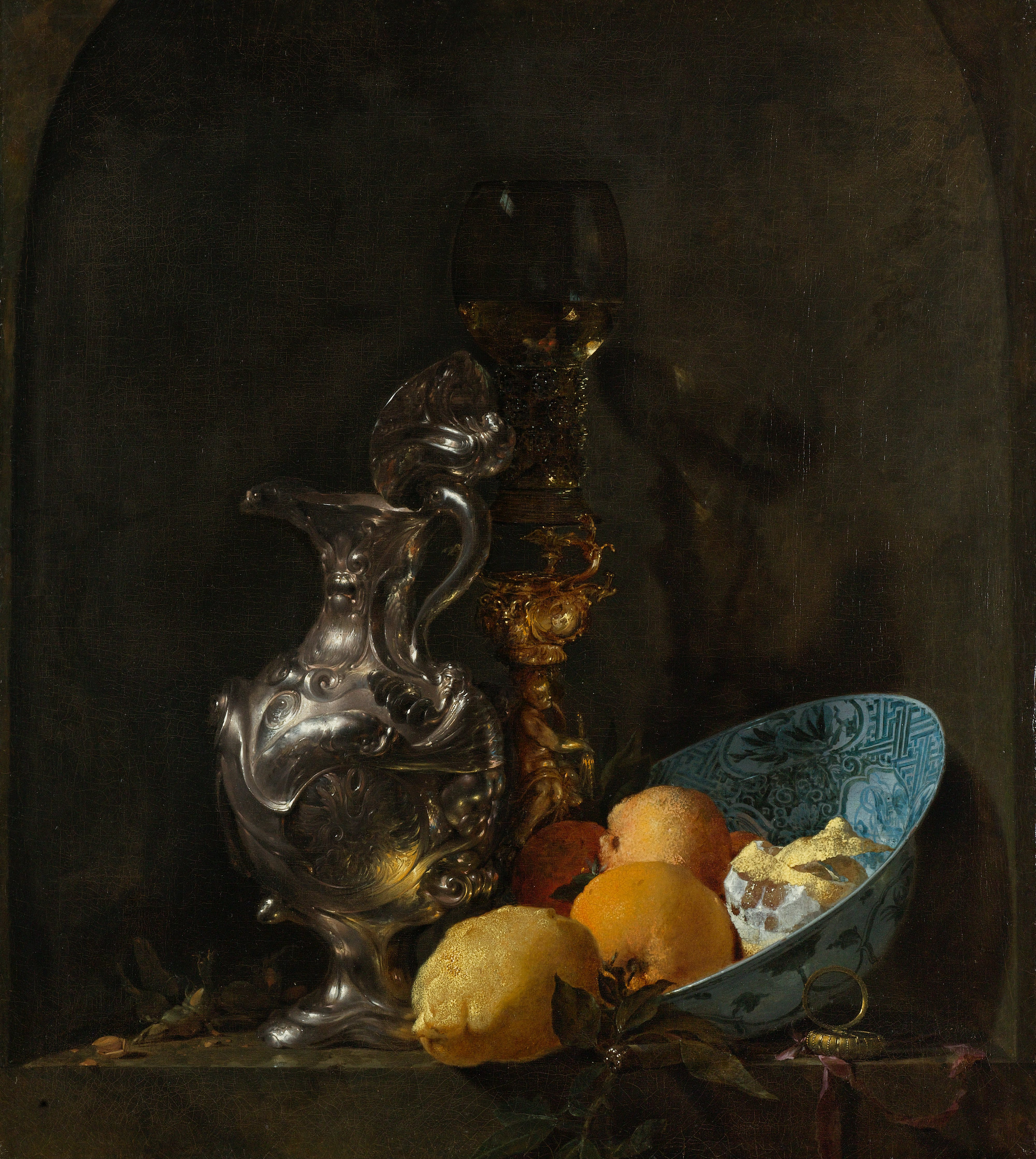 In a trendy coffee shop, I post and then almost immediately delete a picture of my latte, which came with a tiny stroopwaffel. I had placed a book in the corner of the picture to make it seem more on-brand: Here I am, in Amsterdam, drinking this latte—with a tiny stroopwaffel!—and reading John Berger. Isn’t life swell?

One table away from me, I watch a couple take turns photographing each other with their drinks and breakfasts. They use, by my count, three different devices to take pictures and allow their food to sit for over ten minutes before they eat it.

Because I suspect they’re the types to tag their location when they post something to Instagram, I do some snooping. Within a few hours, a photograph of a beautiful woman in a black leather jacket smiling coyly with her latte has garnered over a thousand likes.

The Internet tells me non-celeb Instagram influencers can make over a thousand dollars a post for sponsored content. A quick scroll through the different accounts of the lifestyle and fashion bloggers I follow reveals many similarities—beautiful women wearing stylish outfits, eating lush meals, laughing, grabbing drinks with friends.

They’re masters of the flat lay: here’s a work day with a meticulous journal, a warm cup of coffee, and cozy slippers; or a poolside arrangement with a book, sunglasses, and fruity drinks. The most successful Instagram influencers aren’t selling me an individual outfit or restaurant—it’s a story of someone who, by all appearances, has her shit together. The carefree outfit, the ethically sourced shoes that cost a month’s rent, a pantry of organic food, a working knowledge of contemporary literature, film, and music.

One of my favorite figures of the Dutch Golden Age is a woman named Petronella Oortman. She’s now most famous for being the inspiration behind Jessie Burton’s 2014 novel The Miniaturist. Petronella Oortman, who married young and widowed young, commissioned elaborate dollhouses based on her own home. After Petronella’s death, the estimated cost of her dollhouse collection equaled that of an average Dutch canal house. Like still life paintings, European dollhouses of the seventeenth and eighteenth centuries existed either to show off one’s wealth, and as a teaching tool for young girls to learn how to master their homes—specifically, how to order their slaves and servants between rooms.

It’s tempting to make the argument that a woman like Petronella would use her dollhouses to exert authority in a society which gave her very little control over anything at all. But none of these women who commissioned dollhouses were wholly devoid of agency. Petronella had more control than the average woman: She had money. There’s a reason why we want to see our things neatly laid out. It’s a form of storytelling; it’s also an itemization of wealth. It’s not a coincidence that the emergence of dollhouses coincides with early capitalist societies. Between dollhouses, flat lays, and still life paintings, carefully selected collections of wealth on display beget more carefully selected collections of wealth on display. Behind every pronkstilleven is a story of devastation. Many still-life paintings from the seventeenth century present slaves as décor, situated near banquets of food and wine.

Everything is political. To believe otherwise is a form of willful ignorance. Even something as innocent as looking has far-reaching consequences. Today we attempt to enact control over our surroundings by becoming the curators of our online lives.

Wandering around the museums of Amsterdam, I take photos of still life paintings. I strategically crop them before posting them to social media. Sometimes, it’s to highlight something I find particularly beautiful—a lemon or a bouquet of tulips; other times, it’s to zero in on the brutality—here’s a dead fox, or a skinned rabbit. Removed from their context, these images become grotesque. When we can’t distract ourselves with the beautiful composition, how the colors and brush strokes complement each other, we can see how brutal these paintings really are.

Lindsay Lynch is a fiction writer from Washington, DC. Her short story “Please Help Yourself” was recently named an Honorable Mention by Katie Kitamura for Pigeon Pages's Art of Prose Contest. She has also written for Electric Lit, the Atlantic, The Offing, and Lit Hub, among other places. She is currently an MFA candidate at University of Wyoming, where she is working on a collection of short stories. More from this author →