The outdoors in Jessica Smith’s How to Know the Flowers includes trampled spots, burns, notches, etchings, pressings of botanica, and dyeing. But the scratches and, as she writes in her foreword, “involuntary memories” of sexual trauma and betrayals, are eventually bandaged with the social contexts of motherhood, friendship, and a version of what poet Oki Sogumi calls “a politics of care.”

In this volume, Smith seems to have taken a walk to the other end of Charles Olson’s open field, and turns Objectivist propulsion into something that demonstrates panic and trauma. Over time, Smith slows, winds, and yields to observation and sifts through the data of experience. She stays present to the stakes for a cis woman: how to read the threat of sexual assault, how to read men, and—even more unhappily, how to read other women, and understand when they may betray other women. In this excerpt, the real horror of sexual assault gets mixed in with betrayal and the reader feels that, for Smith, the greatest puzzle is to see how others did not make the choice to be good: “1 April 2017” shows the poet breaking free of a sexually dangerous situation, and the beacon that is the light or the idea of women, becomes complicated and ghastly. Anna, who seems in the photo to be beautiful, is actually reckless, destructive, and criminal. It’s this discrepancy between how people seem and how they act that seems to be the wound, or the scientific problem, on which Smith sets her attention. Through a careful leading of our eye along the field of the page, Smith habituates the reader to retool their perspective. We can read from left to right, or we can weave through and let the eye fall anywhere on the page. We can read from the left column to the right column, or even clockwise. A poem by Jessica Smith yields the feeling that atoms of meaning vibrate, then come together.

These “involuntary memories,” as she calls them in the preface, are never bent to a narrative, so much as they are an arrangement and a practice of cataloging that is together scientific and healing magic. Through her study of plants and the satisfaction that she gets from the process of dyeing, Smith creates a controlling metaphor worthy of the difficult process of healing from trauma. Each observation about hue, mordant, or timing forms a pleasant progression of metaphors for traumatic experiences. Smith keeps records of plants found—the objective logs show her care and precision, though they may not record the narrative of a flower found, or a field being threatened and fought for. The following poem puts the record keeping and the lived processes of discovering flora in tandem. The reader can see that out of this amassing of notation comes a hard-won salve: 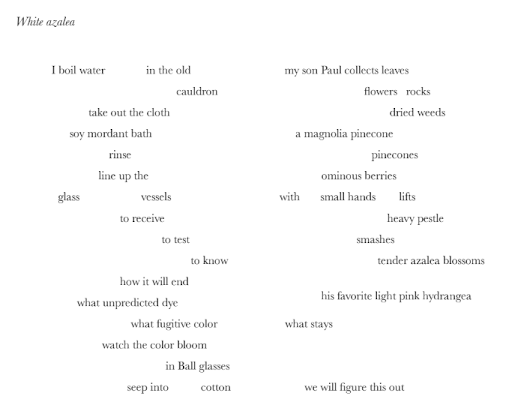 Smith excels at using a familiar language, so that finding the resonances between these adjacent scenes is pleasurable. Flora and its inks mimic the stains people leave on the poet’s life: often beautiful to the point that she makes them—as through the mordants mentioned—indelible. The poise of her son alongside the plants suggests that flora’s power to transform is a power shared by her child. The son’s patience, watchfulness, and emotional assistance also emphasizes, as the form of the lines do, that processing indelible marks is not a clean, linear, or direct methodology. On the left side of the poem, Smith tracks the “unpredicted dye” and “fugitive color.” On the right side, the son presides over his “ favorite light pink hydrangea.” One way to read this is that he is the steady presence alongside the surprising behavior of lesser known people. But if we read each line all the way across the page, the syncopation from the erratic to the powerfully certain creates a recursive riff on process: now what you think you see is what you get, but don’t count on it yet. Nature is quiet about its unpredictable effects, and the poet feels, cruelly so. The son, despite his small hands, smashes the petals and wants, simply, his favorite color. The poem is legible as two columns, but it’s also legible from the top. This multifaceted form allows Smith to perform the complexity of rehabilitation, of revisiting the past, of how simultaneously we are betrayed again by phenomena, but in the peaceful watchfulness of science. It is worth noting that the collection of data, for Smith, is not cold science but a witch’s wisdom: botanical, sensual, subtly joyous. The son, the product of Smith’s own body, can now assist her through his own agency.

The poem that follows, “Black Walnut,” showcases further how simultaneously nature opens up:

Smith shows the pollutants, the systems that confront all of us, with their never-ending processes. They make a gorgeous metaphor for the terrains and toxicity that we have to negotiate with people. The poet dreams of soaking things up, and the “gulf” here hangs in the small space left airily on the right. It has to be observed from a bit of a distance. Slowly the speaker and the surface of the poems build through repetition, the understanding that she could “be convinced to relax but not be taken in.” One of the avocado peels she uses to dye fabric has dyed something “a dusty pink” on the first try. However, on a later test, the same peels make “a darker orange.” Even though she feels the question, “how can you trust people to be good / they all look the same”—expecting people to be good is not the same as maturing and changing expectations. At times, I felt Smith’s trustingness as singular—her speaker’s frustration with human nature and her inability to detect malevolence demands serious attention.

Throughout the book, Smith refers to history, race, gender, financial privilege, and poverty. These subjects highlight the poetry’s attention to power dynamics in which power has been withheld without reason. She touches on a betrayal from a colleague at a former place of employment: It’s unfairness that deepens the wounds the poet is trying to heal. Where she thought a woman superior would protect her, the superior actually turned around and fired her. The surprise dismissal so altered the poet’s life, that she went into mourning for the world that had only existed for her. Mourning is a kind of unproductive searching: Soon the poet shifts away from this mourning and recognizes that nature is unpredictable—that one might adjust one’s expectations accordingly. The avocado skins, for example, imitated such betrayals, dyeing pink once and then orange a different time. The aftermath of her observing this disparity is caution, isolation, and eventually, acceptance of care from a friend. In several poems, the friend, Anna, comes by with food, or activities, and this influx of careful attention to the poet brings relief. This specific human contact creates the space needed for the processing of the flower data and the processing of the trauma to proceed.

Further, after Smith’s experience of observing, dyeing, and cataloguing the plants in the fields near her house, she’s able to tell it like it is—or in this case, as it was. She locates the workplace from which she’d been fired in history: a place born of racist white flight in Birmingham, Alabama, and which has a terrible time seeing its own shortcomings. Folding racial history in with feminist experience offers so much to track, and these observations are what will guide her caution and the way she raises her son. Smith obliquely references Clarence Thomas as a landlord uninterested in letting the meadow flourish, the same ways that the Gee’s Bend quilts have a thoughtful way of building cabins slowly over and over. And the book always shows the ways the political and historical trickle down to the personal. How to Know the Flowers posits that we have little control over betrayals en gros, but we have at our disposal the private interactions that show providing others with attention, care, and sustenance is the only balm for the massive injustices of the world.

Though the book never crops out the natural world, Smith calls on a witchy science to reckon with patterns one can read for warnings. The poet shows care in her attention to natural phenomenon to make this legible. Her record-keeping of her son’s growth, the field’s growth, the dye’s colors, history’s markings, or her friend’s kind gestures show that attention will be the best defense against harm, and that attention helps discern good medicine. For Smith, growth and wisdom cannot be gained by speedy decisions or empty sophistication—time has to elapse for healing to arrive.

Cynthia Arrieu-King is the author of three books of poems: People are Tiny in Paintings of China (Octopus Books, 2010), Manifest (Switchback Books, 2013), and Futureless Languages (Radiator Press, 2018). Her poems have appeared in Poetry Magazine, Bomb Magazine, and the tiny, among other journals. She has written a collaborative book of poems with Ariana-Sophia Kartsonis, By Some Miracle a Year Lousy with Meteors (Dream Horse Press, 2016) and one with the late Hillary Gravendyk, Unlikely Conditions (1913 Press, 2017). She edited Hillary Gravendyk’s posthumous book of poems The Soluble Hour (Omnidawn Books, 2018) and also edited the anthology-length Asian Anglophone issue of dusie. More from this author →