August is winding down. The air in the evenings sometimes carries just a touch of relief from the omnipresent humidity, the tomatoes are bountiful, pencil sharpeners and color-coded folders are still brimming with the possibility of an organized life. I think even if—especially if—you aren’t heading back to school, we are in that season of industry and preparation. I want someone to pack me adorable lunchboxes. (Call MacDowell and put in a good word for me?) It’s easy to become nostalgic for what masquerades as a “simpler time,” but I am beginning to suspect is actually just “youth.” Most of these books, while absolutely delightful, will probably cure you of any schoolhouse or campus nostalgia.

Blue Angel by Francine Prose
It has been years since Swenson, a professor in a New England creative writing program, has published a novel. It’s been even longer since any of his students have shown promise. Enter Angela Argo, a pierced, tattooed student with a rare talent for writing. Angela is just the thing Swenson needs. And, better yet, she wants his help. But, as we all know, the road to hell is paved with good intentions. Deliciously risqué, Blue Angel is a withering take on today’s academic mores and a scathing tale that vividly shows what can happen when academic politics collides with political correctness. 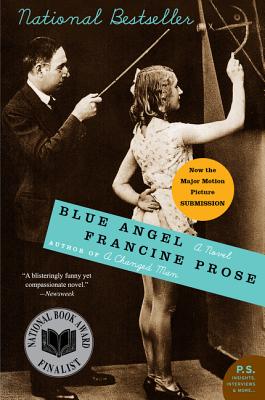 My Education by Susan Choi
Regina Gottlieb had been warned about Professor Nicholas Brodeur long before arriving as a graduate student at his prestigious university high on a pastoral hill. He’s said to lie in the dark in his office while undergraduate women read couplets to him. He’s condemned on the walls of the women’s restroom, and enjoys films by Roman Polanski. But no one has warned Regina about his exceptional physical beauty—or his charismatic, volatile wife. Bunny by Mona Awad
Samantha Heather Mackey couldn’t be more of an outsider in her small, highly selective MFA program at New England’s Warren University. A scholarship student who prefers the company of her dark imagination to that of most people, she is utterly repelled by the rest of her fiction writing cohort–a clique of unbearably twee rich girls who call each other Bunny, and seem to move and speak as one. But everything changes when Samantha receives an invitation to the Bunnies’ fabled Smut Salon, and finds herself inexplicably drawn to their front door–ditching her only friend, Ava, in the process. As Samantha plunges deeper and deeper into the Bunnies’ sinister yet saccharine world, beginning to take part in the ritualistic off-campus Workshop where they conjure their monstrous creations, the edges of reality begin to blur. Soon, her friendships with Ava and the Bunnies will be brought into deadly collision. The Incendiaries by R. O. Kwon
Phoebe Lin and Will Kendall meet in their first month at prestigious Edwards University. Phoebe is a glamorous girl who doesn’t tell anyone she blames herself for her mother’s recent death. Will is a misfit scholarship boy who transfers to Edwards from Bible college, waiting tables to get by. What he knows for sure is that he loves Phoebe.

Grieving and guilt-ridden, Phoebe is drawn into a secretive cult founded by a charismatic former student with an enigmatic past. When the group commits a violent act in the name of faith, Will finds himself struggling to confront a new version of the fanaticism he’s worked so hard to escape. Haunting and intense, The Incendiaries is a fractured love story that explores what can befall those who lose what they love most. The Name of the World by Denis Johnson
Michael Reed is living a posthumous life. In spite of outward appearances—he holds a respectable university teaching position; he is an articulate and attractive addition to local social life—he’s a dead man walking. Nothing can touch Reed, nothing can move him, although he observes with a mordant clarity the lives whirling vigorously around him. Of his recent bereavement, nearly four years earlier, he observes, I’m speaking as I’d speak of a change in the earth’s climate, or the recent war.

Facing the unwelcome end of his temporary stint at the university, Reed finds himself forced to act like somebody who cares what happens to him. Tentatively he begins to let himself make contact with a host of characters in this small academic town, souls who seem to have in common a tentativeness of their own. In this atmosphere characterized, as he says, by cynicism, occasional brilliance, and small, polite terror, he manages, against all his expectations, to find people to light his way through his private labyrinth. Real Life by Brandon Taylor
Almost everything about Wallace is at odds with the Midwestern university town where he is working uneasily toward a biochem degree. An introverted young man from Alabama, black and queer, he has left behind his family without escaping the long shadows of his childhood. For reasons of self-preservation, Wallace has enforced a wary distance even within his own circle of friends–some dating each other, some dating women, some feigning straightness. But over the course of a late-summer weekend, a series of confrontations with colleagues, and an unexpected encounter with an ostensibly straight, white classmate, conspire to fracture his defenses while exposing long-hidden currents of hostility and desire within their community. Educated by Tara Westover
Born to survivalists in the mountains of Idaho, Tara Westover was seventeen the first time she set foot in a classroom. Her family was so isolated from mainstream society that there was no one to ensure the children received an education, and no one to intervene when one of Tara’s older brothers became violent. When another brother got himself into college, Tara decided to try a new kind of life. Her quest for knowledge transformed her, taking her over oceans and across continents, to Harvard and to Cambridge University. Only then would she wonder if she’d traveled too far, if there was still a way home. Magic for Liars by Sarah Gailey
When a gruesome murder is discovered at The Osthorne Academy of Young Mages, where her estranged twin sister teaches Theoretical Magic, reluctant detective Ivy Gamble is pulled into the world of untold power and dangerous secrets. She will have to find a murderer and reclaim her sister—without losing herself. Never Let Me Go by Kazuo Ishiguro
As children, Kathy, Ruth, and Tommy were students at Hailsham, an exclusive boarding school secluded in the English countryside. It was a place of mercurial cliques and mysterious rules where teachers were constantly reminding their charges of how special they were. Now, years later, Kathy is a young woman. Ruth and Tommy have reentered her life. And for the first time she is beginning to look back at their shared past and understand just what it is that makes them special—and how that gift will shape the rest of their time together.