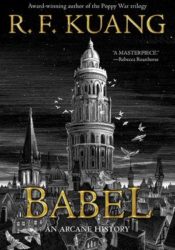 Babel: Or the Necessity of Violence: An Arcane History of the Oxford Translators’ Revolution is R.F. Kuang’s latest fantasy book—and yet it is so much more than a fantasy. Here, what is imagined is far from escapism. Based upon the history of British colonialism, diasporic identity, the power of language, and Kuang’s own experiences with racism at Oxford, Babel manages to build a magical world of its own while still being grounded in the very real effects institutions based in white supremacy have on marginalized bodies. Kuang forces us to walk the fine line between reality and the speculative, and we grow more and more unsettled as Babel’s world begins to bleed into ours.

We are brought into Babel’s world from the very first page. A boy, plucked from the cholera-infested dead of Canton, China, is whisked across the ocean and into nineteenth-century London. This is the heart of the British Empire, a city molded by the hands of powerful white men who can move the fate of countries like gods under the guise of saviorism, globalism, and free trade. Not too far from this center is Oxford University’s Royal Institute of Translation, or simply Babel: the center of silver-working, a forceful magic that materializes as words etched onto silver bars. Silver-working draws its power from untranslatability, or the way some words in one language can never be fully expressed in another. The boy is never able to tell us his Chinese name; instead, he is asked to pick an English one, one that would allow him to acclimate more easily to British society and, eventually, to Babel.

He chooses Robin Swift. In this (un)naming, we see the first act of language as violence.

In Babel, language is a resource stolen from the mouths of native speakers. Translators manipulate treaties, trade agreements, and other legal documents in favor of the Empire. Native speakers, like Robin, are stolen from their motherlands and trained at Babel to then be dispatched back to these countries to negotiate for the Crown. Silver-working is not an infinite resource; as a language is spoken by more and more people, it loses some of its untranslatability. Thus, silver-workers exhaust the magic of languages by using it for the pleasures of the wealthy and for maintenance of the Crown’s military might, rather than providing for the very people these languages were taken from. Language and translation become tools of the colonialist project, warped into weapons to violate and take, take, take.

Yet even as Robin becomes more and more aware of Babel’s role in this violence, he is unwilling to let go of the fantasy. Babel, and the white man that brought him there, are his saviors. Or are they?

Babel represented more than material comforts. Babel was the reason he belonged in England, why he was not begging on the streets of Canton. Babel was the only place where his talents mattered. Babel was security. And perhaps all that was morally compromised, yes—but was it so wrong to want to survive?

Robin teeters on the precarious edge between resistance and adherence, unwilling to let go of this beautiful illusion of Oxford—he can try, if he wishes, to preserve the romantic detachment of academia, bury himself in the stacks of Babel’s glorious library studying words and language and translation. As someone who is half-white, Robin moves between moments of passing and moments of being othered. He tries on assimilation “like a new coat, adjust[s] everything he [can] about himself to make it fit, and, within weeks, [wears] it with comfort.” We are brought along with Robin into the fantasy; we can taste its allure. We develop a deep appreciation for language and translation as we follow Robin through his classes (perhaps some of us even indulge in our personal academia fantasies of studying at institutions like Oxford). We feel the strong sense of friendship and camaraderie Robin has with the other Babel scholars. We feel that whiteness is tantalizingly close, that if Robin just tried a little harder, he could stay in the illusion.

But this illusion cannot hold. Babel’s claws are in everything: rising tensions with China, the slave trade in the Caribbean, colonial governance in India, and even workers’ revolts in Britain. Robin’s role as a silver-worker for Babel feels even more treacherous when he realizes that he is playing a role in Britain’s opium sales to China—translation done by the hands of the diaspora for the Crown to profit from their motherlands feels even more like betrayal. Additionally, he is constantly reminded that he can never fully be an “Oxford man.” In one moment, he and another student of color are chased down a dark street by a group of white students and told that they do not deserve to wear the gowns bestowed upon them. In another, he listens to classmates complain that academic spots are being taken away from white students who “rightfully” deserve them. In yet another, his white “savior” uses language as violence and hurls these words at him:

Laziness and deceit are common traits among your kind. This is why China remains an indolent and backwards country while her neighbours hurtle towards progress. You are, by nature, foolish, weak-minded, and disinclined to hard work…You must learn to overcome the pollution of your blood.

The illusion is peeled away, and we are shown that institutions can never be divorced from the violence of the world, especially when they power the very weapons that draw blood. Assimilation, Robin grows to realize, gives only the illusion of safety, temporary privileges that can be withdrawn at any time. But resistance seems futile in the face of something so established, something so large and expansive. Can we resist an institution from the inside? When is violence a necessity, especially when it seems violence is the only language the institution speaks? Is resistance futile, or is history fluid? Can its path be rewritten?

Babel itself operates like a rewriting of history in real time. Story is fluid. The history of a violent revolution (or any history), after all, depends on who is telling the story. Kuang establishes an omniscient narrator who explains translations, snarks on dead white authors, and provides commentary through footnotes. These footnotes, especially, provide clarity on moments of othering, as if to further validate these experiences even when they are quickly passed over in text. When Robin and a brown professor are mistaken as thieves instead of Babel scholars sent to touch up some silver-work at a rich English estate, for instance, the professor is briefly irritated but moves on. The narrator, however, continues this explanation in the footnotes, noting that the professor will often have to enlist other white students to come with them on future trips to prevent further trouble.

These footnotes are also used to correct misrepresentations of history that largely come out of white, male mouths. In one scene, a group of white men discuss the abolition of slavery in 1833, which is “taken with the mild disappointment of a lost cricket match.” One man complains that English abolitionists have no point moralizing when “those poor fellows [are] equally enslaved back in Africa under those tyrants they call kings” (to which the footnote responds: “Here [he] forgets that chattel slavery . . . is a wholly European invention”). In another scene, a white man in India explains that he does believe that Indians have the ability to self-govern (to which the footnote clarifies that he also believes that India should be governed by a class of Indians who are “English in tastes, in opinions, in morals, and in intellect”). These footnotes illuminate, reveal, and rewrite. They are also seemingly a clever stab at the ways, the narrator explains in one footnote, the translations of non-European texts always seem to be loaded with them, “to the effect that the text [is] never read as a work on its own, but always through the guided lens of the (white, European) translator.”

Here, instead, we read Babel through the eyes of the resistance, a story that can be held and felt deeply by nonwhite bodies.

Holding this story in my body–a body of the Chinese diaspora, wrought from this bloodied colonial history–feels like holding my own pain. In Chinese, 疼 means to be in pain, but it also means to love someone or something deeply to the point where their pain becomes yours. In Robin, I see my reflection, and I feel his hurt as my own (I 疼 him). I know how it feels to be seen in a certain way because of my Chinese blood. I know how it is to be in spaces where our mothertongue spilling out of our mouths or the way it shapes our English is seen as a threat, an indication that we will never fully belong in the places we have landed. Or how distance from our motherland means that we slowly feel our mothertongue leaving us. I know how bitter it tastes as the shape of these words we once knew becomes more and more unfamiliar. Sometimes it feels . . . stolen. Sometimes it is stolen—English is, after all, the default of this colonial project. And so each time I speak a Chinese character written in Babel aloud, it feels like a small act of resistance.

Holding this story in my body also feels like a reminder of past, present, and future moments of personal and collective suffering. In Chinese, 吃苦 literally means “to eat bitterness”–figuratively, it means “to suffer.” To me, 吃苦 describes the hardships my ancestors carried, a legacy I honor by being alive today. 吃苦, to me, also carries the implication that sometimes these hardships should be borne silently, valiantly. In a country where a yellow body can never just be, there is a danger of 吃苦 tilting into assimilation. Bear it. Keep your eyes down. Take in the punches. Blend in. Keep up the fantasy. Perhaps what hurts the most reading Babel is the realization that I empathize with Robin’s hesitation. I recognize his guilt because I, too, continue to resist being drawn in by the model minority myth.

But there is a third interpretation of its meaning: 吃苦 can also mean the sacrifices and challenges that we have to suffer through when we choose to resist. These challenges are ongoing as long as the fight is ongoing; it is what happens when we refuse to conform to the illusion. Even when Robin finally chooses the way he will resist, we never quite know how the story ends. As one of Robin’s friends reflects: “Victory is not assured…[it] is a game of inches, of historical contingencies where everything goes right because they have been made to go right.” And perhaps this ending left open is intentional, because even though silver-working and magic are fantasy, the violence, institutions, and powerful white men that ground Babel are very much real, and we are reminded that history is also fluid because it is a continuum into the present. Babel spills out of its pages and onto the couches and chairs and benches that we sit on, reading. It spills out as it reminds us of the violence of the present-day institutions that we are a part of. It spills out and asks: How will you resist and rewrite history?

Hilary Sun (she/her) is a disabled Chinese American. Her writing has appeared in Able Zine and the disability anthology The Ending Hasn’t Happened Yet (Sable Books, 2022). More from this author →