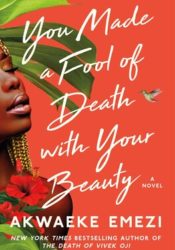 Love, death, sex, grief, and learning to love again. Akwaeke Emezi’s seventh book, You Made A Fool, starts off with a steamy sexual encounter in a bathroom at a house party somewhere in Bushwick: a skirt raised to the waist, jeans caught around the ankles, a playful tête-à-tête. It shouldn’t mean more than it does, and both parties involved—Feyi and Milan—maturely accept the end of the relationship when it inevitably dissolves. To anyone who has read a story or novel by Emezi, a master of the transgressive, it should come as no surprise that Feyi then quickly moves on to Milan’s friend, Nasir, and then ends up in a torrid affair with Nasir’s father, Alim.

When we meet Feyi, she’s an artist still reeling from the death of her husband in a violent car accident, one that she survived. She knows that men are easy—“there were some keys you could use that unlocked them like a quick password”—but she also hasn’t had sex in five years since the accident. Injected into her version of grief is a healthy dose of recklessness and self-loathing. ”I’m on birth control,” Feyi lies to Milan after she urges him to come inside her during their initial encounter. One can’t help but read this novel and think it would be a story Nora Ephron would have written if she had extended her fiction and aimed to subvert. It’s a conventional tale of romance tightly interwoven with the stark contrasts of reality—the abruptness of death and the saving grace of radical friendships and art.

It makes sense that Feyi, the protagonist of this novel—the woman at the center of all this madness, chaos, and desire to survive—eventually jeopardizes her semi-romantic friendship with Nasir to begin a love affair with his father, Alim. Alim isn’t just a wealthy, famous, and widely respected chef who lives on a tropical island. He’s also still dealing with the death of his wife, who drowned more than two decades ago. When Feyi and Alim initially commiserate over their grief, the specificity of their days spent mourning is almost shocking: Feyi has spent five years, seven months, and nineteen days mourning her husband, but she condenses her answer to “five and a half years,” revealing the limits of her vulnerability. Alim chuckles before informing Feyi that his wife has been dead for twenty years, four months, and eight days. Another exchange illustrates their connection through grief:

“I wish I could tell you it gets easier—”

For people dealing with grief, there’s still shame attached to the realization it may last forever. The arc of Feyi and Alim’s romance is rooted not just in their tempestuous sexual attraction to each other but in their unfortunate knowledge and association with loss.

I’d argue, though, that this book’s true romance revolves around Feyi’s friendships with her ex-lover, Milan, and Joy, her longtime best friend who has a penchant for unavailable women. Her friendships are the only constant thing in her life when everything else feels uncertain, and it’s these friendships that ground Feyi to earth when her life inevitably begins to spin out of control. If you were ever in a situation where you feel conflicted about fucking your soon-to-be-boyfriend’s father, you’d probably want a friend like Joy—warm, affable, and non-judgmental—to listen to you whine relentlessly about the dilemma. At various points in the novel, these friendships are what help Feyi understand that choosing to love can also mean choosing yourself. When Feyi starts to doubt her relationship with Alim for fear of hurting his son, it is Milan who calls and encourages her to be happy.

With Milan and Joy, her relationships are a means of survival and hope. She realizes that the burden of grief isn’t something she has to carry alone. That the love of friends can anchor her will to live. Her simmering romance with Alim may seem fatal, but her friends keep her far beyond death’s grasp. All of which is to say that You Made A Fool organically makes the argument that friendships can be just as important and fulfilling as romantic relationships.

Because this novel is about the contours of love and grief but is also scattered with lavish descriptions of myriad mouth-watering cuisines, I’m afraid I’ll have to bring up iconic journalist and food lover Nora Ephron once again. It is to Emezi’s credit that they seem to take a cue from Ephron, using delicious meals as storytelling vehicles without sounding trite or shoe-horned into the story: a dish of lionfish ceviche in coconut-and-lime sauce transforms into a symbol for grief; curried goat and breadfruit slice act as sources of fleeting joy in Feyi’s mouth; a grilled cheese sandwich with caramelized onions becomes a labor of love. If this book doesn’t inspire feelings of exhilaration and nail-biting tension, I’m more than certain of its capacity to induce rabid hunger.

Feyi talks like Emezi writes and speaks—there are multiple references throughout the novel to the importance of “the work,” their singular dedication to respecting their chosen craft, which can pull the reader out of the trance of Feyi’s psyche. But what Emezi understands clearly is that material success largely depends on not just what you know but who you know, an idea that runs seamlessly through the story. Feyi gets her big break when she gets a slot in a group show for Black diaspora artists because Nasir works his connections by urging his father to add Feyi to the show. And work begets more work: Feyi also gets commissioned to work for a gorgeous art collector named Pooja for fifteen thousand dollars. By the end of the novel, the sky’s the limit for Feyi, not solely because of her ability to create memorable, daring pieces of art but because of the individuals who exist in her newly created orbit. As in the real world, serendipity is inextricable from worldly success.

There’s a certain predictability and simplicity to this novel that’s sure to be jarring, maybe even annoying, to anyone who is familiar with Emezi’s previous works. Their well-known stories exploring complex themes of spirituality, the textures of deities, and otherworldliness pale in comparison to the stripped-down humanity of this novel. People in this story—things of this world born of flesh and blood—fuck recklessly, eat gleefully, love with abandon, and some of them even die, which is to say they also lived. While reading, it becomes clear that the author’s aim, or at least a slice of it, is to show a different lens, other than the romantic, through which people can attain fulfillment. A person doesn’t need to be indestructible; they just need to open themselves up to the power that resides in the love of self, friends, and community.

Nwokedi Kenechukwu is an avid reader of African, Black, and/or queer authors. When he's not busy writing he moonlights as a cloud engineer and pop culture historian. More from this author →