In White Blight, translated by Jennifer Hayashida, Athena Farrokhzad makes a powerful debut for English-language readers—one that is even more powerful set against the backdrop of the ongoing Syrian refugee crisis and the bigotry and hatred spewed by current US presidential candidate Donald Trump. The original Swedish language version, Vitsit, was nominated for numerous awards and has even been staged as a play. The book, perhaps a take on Farrokhzad’s own life, from being born in Iran and immigrating to Sweden, is an important contribution to the literature of diaspora.

White Blight is one long lyric poem composed of six voices, the narrator and the narrator’s father, mother, grandmother, brother, and uncle. Each character speaks in concise, stark language, ruminating on the past, familial obligation, war, and the alienation they face in their adopted country:

My father said: Your brother shaved before his beard started to grow
Your brother saw the terrorist’s face in the mirror
and wanted a flat iron for Christmas

My brother said: Some day I want to die in a country
where people can pronounce my name

Throughout the book, there are only two pages where the text is not attributed to other speakers. The very first page, which serves as an introduction of sorts before launching into the litany of statements by the other voices, and then, startlingly, a single phrase shortly into the collection: “The past is an assault never to be completed.” The experience of the war in Iran, immigrating, and living in exile has severely affected each member of the family and how they relate to one another. The past continues to be an assault in the present. It conditions the family members’ relationships to everything else including to each other. In one particularly poignant statement, the narrator’s brother says, “Your family will never be resurrected like roses after a fire.”

There is a strong visual aspect to the poem with the text appearing in white over black boxes. It appears this way in both the original Swedish version and in Hayashida’s translation: 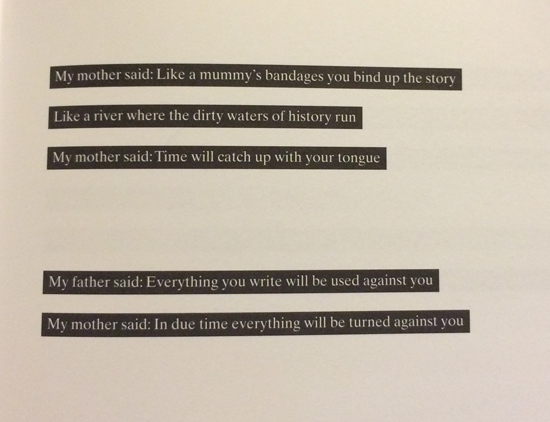 The effect recalls obliteration—the literal writing over of something—but also foregrounds whiteness in a text that opens with the narrator accusing her mother of letting “bleach run through her syntax.” Ultimately, the visual effect contributes to the starkness of the language, powerfully sets a rhythm to the work by slowing down the reading of the poem, and serves as a way of isolating the speakers who seem to have a hard time connecting with one another.

While one effect of using multiple voices allows for collective storytelling and multiple perspectives, it also raises questions of reliability throughout the poem. The reader is constantly reminded that he or she is not hearing the speakers directly through the repeated use of the phrases “My mother said” or “My father said” and so on. Instead, the voices are filtered through and arranged by the narrator.  Additionally there is a recurring insistence that the story can only be told through “disfigurement”—that the person who tells the story is changing the shape of it and cannot be trusted by those whose story is being told. In one section, the various voices ask the narrator who is being written about:

My father said: Whose father are you rendering

My mother said: Whose mother are you rendering

My brother said: Whose brother is being referred to

My mother said: All families have their stories
but for them to emerge requires someone
with a particular will to disfigure

My mother said: You distort the injury with your unfortunate lie
There is a muteness that cannot be translated.

Two lines later, the brother echoes, “There is always something incomplete missing.”

A distrust of language and the act of capturing stories in words permeates the text. The grandmother is quoted as saying, “Mothers and languages resemble each other / in that they incessantly lie about everything.” The idea of the “mother tongue”—the language of one’s ancestral land—appears more than once in the collection, but here in the writing of this book Farrokhzad turns to using the language of her adopted country. The book, set against violence towards immigrants and racism in Sweden, states: “The only language you have to condemn the crime / is the language of the criminal / and the language of the criminal / is a language to justify the crime.” However, the narrator’s father advises, “Speak the language that pays for your bread.” While telling a story of immigration and exile, White Blight also captures a portrait of a family. The mother and narrator are regularly at odds with each other. The father explains the narrator is just like her mother, which is everything her mother hates. In the opening section of the poem, the narrator condemns her mother’s attempts at assimilation. She is repulsed and says, “To think that I sucked at those breasts / To think that she put her barbarism in my mouth.” Later the mother notes, “Only the line that provokes my tears / do you consider worthy of notation” and states, “You build the poem from my shortcomings / Then you say the poem is not mine to mourn.” The mother accuses the author of speaking about something that she does not understand. The father also admonishes the narrator, who is mostly voiceless throughout the poem: “Who is speechless in a poem about language.”

The mother is perhaps one of the most complicated characters in the book. While she is the target of the narrator’s anger, there is a sense that the mother has suffered much and continues to sacrifice for the sake of the family’s survival. Her stoic speech signals her strength and regularly cuts to the truth of the matter at hand: “My father said: Even the rooster who does not crow gets to see the sun rise / My mother said: But if the hen does not lay an egg she will be served for dinner.”

White Blight is a thoroughly captivating read from beginning to finish. Hayashida’s translation of Farrokhzad powerfully captures a family who has gone through war, torture, exile, and racism, capturing the way those experiences continue to bear out—the way people continue to carry their experiences and traumas, and the way those experiences and traumas may continue to affect their relationships going forward. White Blight is a profoundly human and humane book whose English translation has appeared at an important time.