To execute this maneuver properly—which is to say, to execute it at all—you must first lock your feet into the silks, climbing a hitch or two up slippery ribbons of stretch polyester and then, holding on tight, leaning back into nothingness with one length of the twinned poles of fabric loosely wrapped around one ankle. Push the loop up and over the toes of that foot with the flexed instep of the other so that it cinches tight across the bridge and creates a platform upon which to stand.

Repeat with other foot. Reach up and grasp the silks high above your head, right hand to left pole, left hand to right. In one deceptively liquid move pull the silks past each other so that they form an “x” between your scapulae. Shimmy the “x” down to the small of your back and, from this strenuously awkward position, your back arched, your ass jutting out, your feet laced into bundles of gaudy cloth, you will spread your legs wide and contract to tuck your pelvis up into your belly button, pulling yourself up toward the ceiling from your shoulders and somehow pushing back against the silks at the same time. Do this with all the strength at your disposal and in one polished maneuver you will invert your hips above your head and drop down into the safety of the saddle, legs extended in a wide “v,” a river of fabric streaming down from each ankle, and it will be beautiful.

Or you will strain and grunt and flail. Your legs will kick and every one of your trapezius muscles will tense and you’ll squeeze your abdomen and push-pull-push with all your might and never quite hit the sweet spot that will launch you over into gravity’s arms, remaining forever suspended in the messy, effortful moment before the crossback straddle’s sweet release.

You will fail, gracelessly. If you’re lucky you’ll be able to at least untangle your feet from their double-wrapped cocoons before you drop to the mat and pant, breathless, speechless.

The circus puts outrageous demands on practitioners’ bodies, and its skills—whether trapeze or tight wire—require an alarming amount of training to master at even the roughest definition of grace. Silks, which at this point I’ve been studying for 18 months, are slippery and maddening, an elusive, grinding discipline that, in the right hands (or feet) is transformed into an art form of otherworldly elegance. In costuming and choreography silks acts tend to the fairylike and nymphic, with performers dipped into unitards evocative of the Milky Way, or mermaids, or both, and it perhaps goes without saying that, unlike Chinese pole or straps, it’s a stereotypically feminine skill. In fact, silks performers often make rent by adding a splash of exoticism and artful t & a to car shows and corporate events, 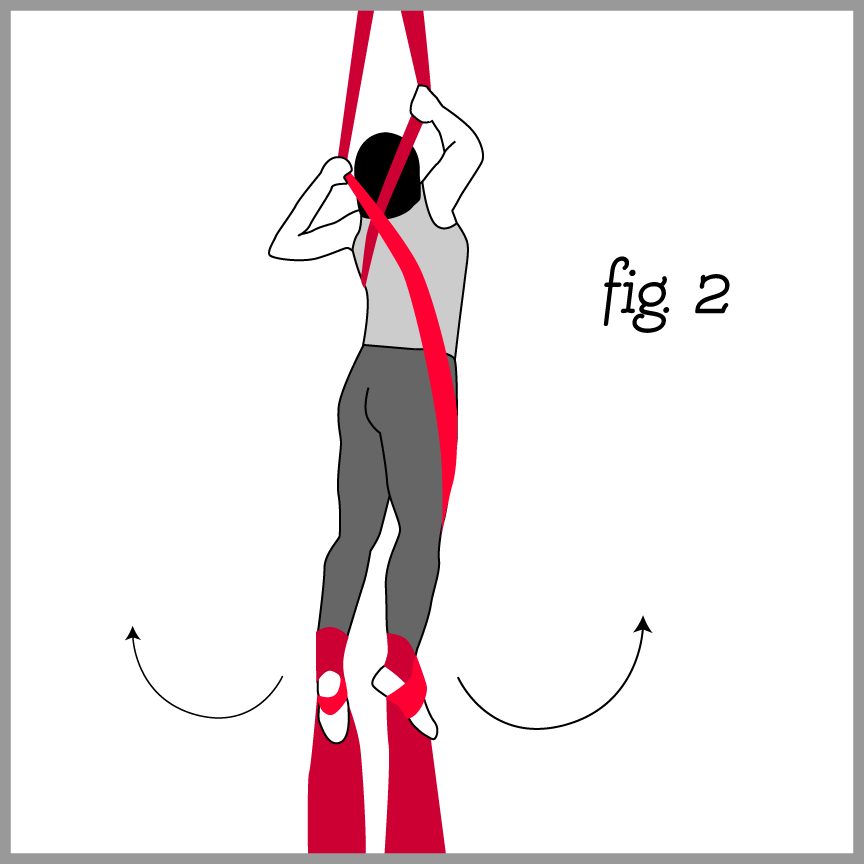 dangling high above a crowd of bankers who may look up to marvel for a moment when a bespangled woman silently slips into her splits.

The beautiful woman suspended in air, silent and half-naked, wrapped into knots of fabric—unattainable but eternally on display? Right. For years I was suspicious of the circus and its retrograde charms. But, in recent years I’ve come around.

Because, really, what’s not to like? A traveling carnival of dangerous animals and scantily clad immigrants, the circus is the safe haven of hustlers and thieves—of anyone on the run from respectability. It’s always been an affront to civilized discourse, a marginally safe space for all flavors of transgression. The circus celebrates the grotesque, the illusory, the impossible, the unspoken, offering the giddy possibility of transcendence to both practitioner and spectator. And nowadays, away from the slickly commercial juggernauts of Ringling and Cirque de Soleil, it has the capacity to bundle the postfeminist physicality of burlesque, the rough aesthetics of the underground, the expressive potential of dance, and the populism of street theater into one gaudy visual language.

Best of all, perhaps, the circus is refreshingly direct in its mechanics—the apparatus of magic in full view, not tucked behind the drapery. The sweat and effort of its practitioners can be heard, and seen, and smelled. That mermaid unspooling down the silks? She’s grunting as she falls.

I have a friend. A good old friend. Now in our 40s, we’ve been through some stuff together and we’ve each been bounced around enough by life’s bumps and betrayals that it’s fair to say we share, to a point, a certain fortresslike emotional affect. But only to a point. Because where I seem to flinch from conflict, reaching for the soothing balm of deference or the stiff splint of silence, she likes to stick her fingers in—not just with lovers but with friends and family and the occasional interesting stranger. She pokes around, asks questions, looks for the open nerves, finding out where they lead and massaging each taut fiber. Not for sport or out of malice but because she truly believes that by doing so she can uncover truth and foster intimacy in all its sweaty mess.

This, unsurprisingly, sometimes leads to problems.

A while ago we got into an ugly fight, she and I, after trying and trying again to talk our way out of an intractable conflict for which there seemed no good resolution. Struggling to put words to our frustration, to find a common language, we grew each only more incomprehensible to the other as she pushed and I balked, not wanting to climb higher, where it felt unsafe. The moment exploded in a burst of hot tears and anger.

It was bad, and even though we made up, as we always do, the conflict remained, and in its unforgiving light the limits of talking things out were laid bare. Words failed—and it was actually strangely instructive. Now, months later, if one of us is stuck in a moment of confusion and loss, we might text the other, bouncing nonsense from one cell tower to the next.

We understand each other perfectly.

A month or so after I won some circus classes in a raffle, I remember being annoyed as I wandered the long corridors of the converted industrial building that housed the studio, pissed that I couldn’t find it and consumed by the resentful feeling that I was chasing yet another clearly ridiculous idea. I’d tried aerial classes once before in fact, years earlier, and quickly abandoned them in frustration, as the physical demands of climbing and grasping and inverting threw my every ache and weakness into bleak relief.

But this time that first class wasn’t so bad. In fact, it was pleasurable, in its effort.

And I went back, week after week, kicking and flailing. Last winter, when the snow piled up in Chicago and the temperature dropped and dropped and dropped some more, and the act of leaving the house became, by March, traumatic, the plain discipline of going to class and muscling through against gravity and failure seemed the only sensible course of action.

That winter, dug into a sadness so deep that joy felt as elusive as a warm, sunny day, I found, for a few hours, not happiness exactly but understanding. The act of climbing the silks was a story with a beginning, middle, and end, and when I slid into my splits the stretch into hips and thighs felt like coming home.

I worried that I was escaping into my body—that I was running away from age, running from ambition, from engagement with the wider world. Derided since Juvenal as pap for the masses, or children, circus still gets a bad rap as both art and practice. But, as a friend pointed out, the circus always flowers with the end of empire—in Rome, in Russia, in Britain and France. Here and now, in a season of mass degradation, the culture stupefied by clickbait and terrorized by war, my own city perpetually under fire and up for sale, and my body ever-more alert to the end of its own empire—its fertility, its beauty, its strength—it felt curative to turn away from the public narrative toward some private spectacle stripped of words but heavy with sweat and risk. Can it really be escapism if you’re working so hard?

There’s an ongoing debate in performance circles about whether circus can communicate narrative and emotion—about its potential to tell a story rather than deliver a spectacle, or, aspirationally, do both at once.

Typically, the circus is short on meaning, and long on showstopping display. The aerialist hooks onto the trapeze and all but the spotlight dims. The peripheral activity—the other rings under the big top; the story being told on stage—stalls and all eyes turn to the tumbler in the air, breathless, until the act is over with one final flourish. When the applause dies down, the rest of the action picks up again, as though nothing ever happened. Plus, the physical restrictions of circus performance—both the grueling demands on the body and the technical requirements of rigging and padding—are a problem when it comes to creating theatrical narrative. The aerialist can only stay aloft so long before her body breaks, and it’s hard to maintain the suspension of disbelief theater can require when there’s a four-foot-thick mat on stage.

Still, the physical stakes of aerial work in particular—the ever-imminent risk that an artist will fall from the high wire, will fail to catch a trapeze partner by her ankles—give the form an immediacy other forms of performance can’t channel. “You cannot perform a 5-meter drop towards concrete or throw and catch seven objects without complete investment in what you are doing,” argued an article on the website Circus Now. “And this investment has a quality of honesty and proximity in that the artists themselves are in a position where failure is as real, non-negotiable and tangible as the possibility of success.”

It’s that immediacy of failure that kept me coming back to class, week after grueling week. When the story I’m trying to tell doesn’t make sense, when the narrative is stuck in the mire, bogged down by the weight of its own ambition, its preposterous dreams, the circus, in all its nonsense, offers clarity: up or down?

The first time I performed a crossback straddle I tucked my pelvis toward the sky and I felt my hips lift over my shoulders and it was like falling in love—when fear and doubt are stripped away and you feel yourself flying effortless and strong, flush with understanding.

“Oh my god!” I yelped, in that moment of release. Oh my god.

But of course it didn’t last. I struggled to do it again just two minutes later; couldn’t remember the trick the next day; couldn’t find the fulcrum for many days to come.

“Raszzllbach,” I panted, swinging my hips and Trying and failing, over and over. Shoulders aching, palms permanently tacky with rosin. Fabric burns have stripped the flesh from the back of my knees, and one day I sat for 15 minutes after class watching, oddly detatched, as my forearms shook with exhaustion. The reward? Placement into Advanced Beginning Silks, where, I’ve since learned, the grunt labor of staying aloft is replaced by ever-more terrifying lessons in learning to drop from the rafters.

Still it’s enough to creep inch by inch up the fabric, beyond words and toward understanding. Sometimes the attempt to connect—your body to the apparatus; your heart to another’s—is all there is.

Slap some spangles on it, and the effort is the story.