The penultimate scene of 2002 fantasy horror flick Queen of the Damned features a team of vampires feasting on the blood of mythological first vampire, Queen Akasha. Her progeny—and that’s what they are given Akasha’s status as the original vampire—exsanguinate her. She is the mitochondrial Eve of her species, and she is consumed.

I was thirteen when I first watched late black singer and actress Aaliyah in the part of Akasha in what was, start to finish, a noxiously mediocre film. She was a formidable villainess, and though I felt I’d been deceived into viewing (Akasha’s the title character but receives twenty minutes of screen time), it was novel to see a black woman in a speculative film. Still a child, I couldn’t know what it meant intellectually that this black primal mother character met her demise so violently. My enchantment with Aaliyah’s performance prevented me from seeing how images of Akasha’s metaphorical young eating her alive would leave welts on my psyche. It wasn’t until I was eighteen years old that I was properly baptized into black science fiction. My girlfriend at the time discovered my interest in speculative literature and asked me how familiar I was with African-American author Octavia Butler. Attempting to maintain some credibility, I said something like, “She’s on my list, but I haven’t gotten to her yet,” but a more accurate answer would’ve been, “Octavia, who?” Like many young people, I’d been coerced by the establishment into a literary diet consisting exclusively of white men.

In order to fill this gap in my science fiction education, she insisted I borrow her copy of Butler’s Fledgling, a vampire novel with a heavily technical flavor released in 2005. Given the year of publication, I expected the plot to share themes in common with its contemporary, Twilight, another 2005 release, but instead found a narrative that addressed the anxieties I faced as a young black gay woman: unethical medical experimentation, genocide, and, perhaps without meaning to, unconventional modes of motherhood.

My life so far as a fiercely independent bookish tomboy reached a powerful turning point upon reading Fledgling. I’d known since I was very young that my path to family would be convoluted. I fixated on adoption, thrived on stories of found communities. In retrospect, these facets of my personality were a manifestation of my raging dykeness, a subconscious expression that I was a girl who liked other girls, and this meant marriage-then-reproduction was an unlikely outcome for my future.

Besides, a number of speculative pieces confirmed fears I’d internalized about the so-called usual paths to the nuclear family. I watched the 2004 remake of Dawn of the Dead in theaters when I was fifteen, grimacing at the screen when Inna Korobkina’s character Luda gave birth to her horrifying zombie offspring. Although Luda isn’t black, her relationship with black man Andre, played by Mekhi Phifer, paired with her Russian accent marked her as sufficiently other. She was my representation in this film. I wasn’t the perky protagonist. I was the vessel who would be laid to waste. I learned from her that biological motherhood was to be avoided at all costs, as it will always end in complete obliteration of the self.

Body autonomy was and still is the driving factor in my gender nonconformity and in my feminism. Depressed by the ways patriarchy could bludgeon, pressure, and intimidate women into contorting their bodies into painful shapes, I understood speculative portrayals of motherhood, specifically black motherhood, to be a very called-for warning, a warning that I would heed. I would protect my uterus from anyone seeking to make a ruin of it.

Octavia Butler expanded, deepened, and complicated my understanding of reproduction, family, and motherhood. In Fledgling, fifty-three-year-old black vampire Shori awakens in impossible pain, all her memories gone. The member of a race of nocturnal, venomous, blood-sucking immortals, she should occupy a position of power. On the surface, she often does, but images of a disempowered, exploited heroine open the novel and persist throughout. Despite her age, Shori appears to be roughly ten years old. When she’s taken in by a man named Wright, and they eventually bed one another, the reality of Shori’s youth-like appearance calls into question the ethics of their relationship. Butler attempts to legitimize the union in the text, but for a young reader like I was, the message I received was that sex, intimately tied with reproduction in my mind, was exploitative. That is, that’s the message I received in hindsight. In the moment, I was too young to know what to make of it other than to accept that this was all right at face value.

My girlfriend and I spoke often about motherhood. We knew we were destined for togetherness. Deeply in love, damaged in our own ways, we saw the potential for healing ourselves and healing the future in rearing children, in building communities. We discussed potential names (Lilith and Phoenix, of course) and parenting practices we’d implement. She wanted an unmedicated birth. Traumatized by images of pregnancy and any version of mothering that involved a biological link, I was relieved I didn’t have to be the gestational parent.

Sexual intimacy with my girlfriend would never result in pregnancy. The reproductive limitations often involved in same-gender relationships are a source of pain for many, but I found them liberating. Fresh with the images from Fledgling in my mind, I made a vow that I would never be a host. Yes, that was how I thought of it, my self-image inextricably bound up in science fiction. This dyke’s body was her own.

Shori had to suck on the blood of her humans, including Wright, to survive, but more distressing to me was that her symbionts, these humans she fed on, became chemically addicted to Shori’s venom. This venom gave them strength and longevity, increasing their lifespan by hundreds of years. It all fit together in my mind, the potentially exploitative relations between Shori and Wright, this chemically dependent relationship, this loss of the body to another.

Throughout my twenties, years after my girlfriend and I parted ways, I kept a critical eye on speculative portrayals of black motherhood and family. Even films that attempt to paint a less grim picture disturbed me. In Children of Men, a man fights to protect a black refugee woman named Kee, the first human to become pregnant in nearly twenty years. Somehow, however, the film is not about her, but the white man transporting her.

I think of The Walking Dead’s Michonne. I think of her dead child, revealed in a single episode of backstory. I think of how she cares for the children of the protagonist in trope-like Mammy fashion. In the scene where she’s first introduced to the main cast of characters, she is delivering infant formula, and all of it mashes together in my head. The history of enslaved black women raising their slavers’ children, forced into being their wet nurses. There is the First Slayer on Buffy. Like Akasha, she’s another metaphorical mother as the first, the original, the Eve of the Slayer line. She is black and generically African. She had demons bound to her against her will by witch doctors.

Despite my troubles with Fledgling, I came back to Butler often. In her series Lilith’s Brood, a tentacled alien species called the Oankali force a black woman to bear human and Oankali hybrid children. 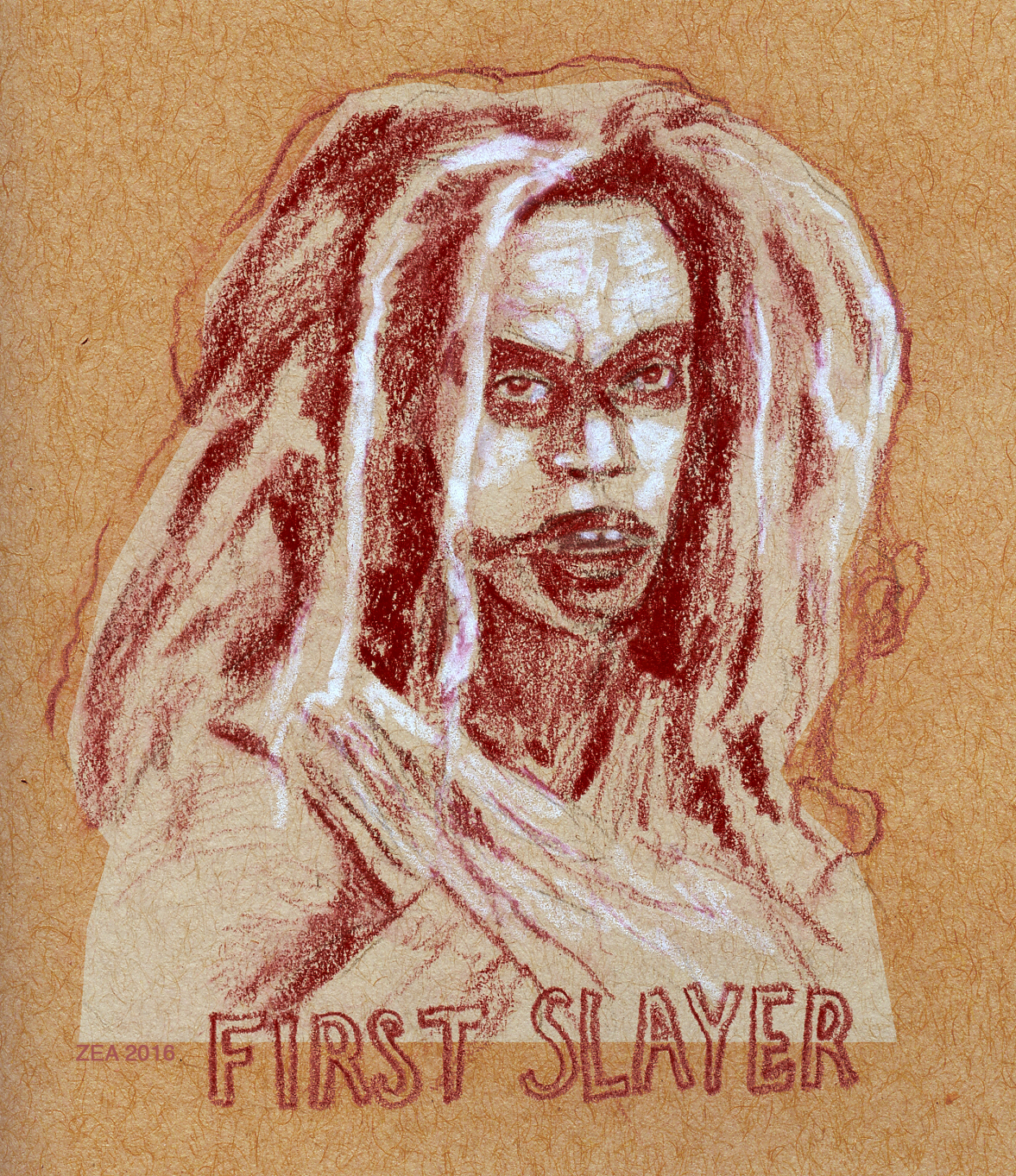 When I met my current partner, I was certain that we would adopt, though against my own cis-sexist expectations, I was for the first time in a relationship that could produce children—if a bit complicatedly (my PCOS, diabetes, mental illness, and chronic insertional vulvar pain, her transness, and our various traumas surrounding sex). Perhaps it was these troubles that years into our relationship led to my violent rejection of what sci-fi media had fed me. Carrying a child became something I had to fight for in a world that wanted to deny me access to motherhood. Eugenicists have sought to prevent people like me from, to use a coarse term, breeding for centuries.

I remembered films like Dawn of the Dead, where the narrative portrays Andre as crazy and unreasonable for fighting for Luda’s right to birth her child. I began to see these formative works a campaign of scare tactics.

In the months preceding what turned out to be an extraordinarily difficult pregnancy, I prayed nightly to my little-girl self. I was begging for forgiveness, gesturing mentally to the mess of ovulation predictor kits, supplements to improve my egg quality, and marked calendars as I sat on the bathroom counter.

This was not who I imagined I’d become. The woman with the detailed menstrual cycle log. My body had become the target of my own dogged scrutiny, and I could not avoid self-comparisons to factories, to productivity quotas. There was myself, and there were my reproductive organs, which I could no longer consider a part of me.

I envisioned a new science fiction canon, one in which I was a cyborg, fashioning my body into something new. My body was mine, mine, mine, but it was being modded, hacked. I was the Oracle, the mother of the Matrix, making a future where bodies like mine, bodies like my future child, had modes of survival and reproduction outside of pain.